Traveling around the world. Ukraine. 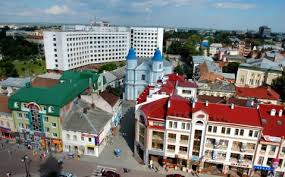 My very first trip to Europe brought me to Ukraine for a choreography gig.

Before I had to fly there I heard somewhat unflattering things about that country. I was scared to death about the trip but went anyway.

I flew solo from LA to New York, New York to Moscow, Moscow to Kiev and from there I took a train to Ivano-Frankivsk. Not bad for a scaredy cat, you might say and I agree ;-).

The first conversation I had with anyone outside of airport security was with my lovely guide and translator named Maxim. I met him at Kiev airport. I felt so relieved to see him, not because he was my translator which was great but because he was a fellow dancer. We shared the same passion for dance and movement.

Maxim was a source of familiarity and he made me feel comfortable in an unfamiliar place.

They mimicked my steps feeling the beat of the music and we were all moving to the groove and smiling. They all made me feel so welcome and so at ease, as if there were no language barriers, no miles that separated us. There was just the music, the beat and the dance coming to life right there, at that very moment.

When I got back to the US from Ukraine, I realized how much that trip helped me grow and mature in my thinking.

First of all I recognized that I could not live my life in fear of what possibly could  go wrong, but instead should just open my mind, face my fears, embrace my life and trust its course.

Secondly, dance connects all people by bringing down any walls and boundaries. It is a common language shared by millions.

A year later Maxim came to LA and took my hip hop class at Debbie Reynolds’ Studio and I was able to be his tour guide through LA and its dance world.

language of dance no barriers open your mind

2 Replies to “Traveling around the world. Ukraine.”